Publishers Weekly weighs in on Séance in Sepia 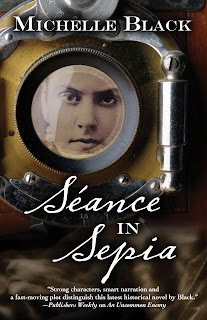 This coming October, my new Victorian mystery novel, Séance in Sepia, will be published in hardcover by Five Star/Gale. As regular followers of this blog know, the story invites the reader to enter the bizarre world of Victorian spirit photography along with Flynn Keirnan who buys a strange old photograph at an estate sale.

She soon discovers the three figures in the photograph were involved in a notorious 1875 murder case in which a young architect was accused of killing his wife and best friend. Through trial transcripts, a journal kept by one of the victims, and notes from a jailhouse interview with the accused husband, Flynn learns that feminist firebrand and renowned spiritualist Victoria Woodhull was asked to contact the victims of the notorious “Free Love Murders” but the one-time presidential nominee soon found herself entangled in a web of intrigue and deceit that would take much more than a séance to resolve.

Weathering the gauntlet of reviews is the moment that every novelist both lives for and fears to the point of night sweats, but for this writer, the waiting is over and I can breathe again.

Publishers Weekly has reviewed my five previous novels and I am proud to share this new review of Seance in Sepia wherein they called it a "complex, skillfully told stand-alone" and conclude with:


"The smooth prose moves subtly between historical and modern investigative voices, leading the reader to muse along with the characters on the nature of how love has changed over the centuries."