A Time Traveling Victorian Village...with a Killer View of the Rocky Mountains

Regular readers of this blog know that I write novels set during the Victorian era. That said, what better inspiration could such a writer have than living in a neighborhood which seems to have appeared from that time period, full blown, like a Victorian version of Brigadoon?

Imagine, if you will, a modern housing development whose homeowners' association encourages rather than proscribes unique and even eccentric house colors, that mandates large, covered front porches, and requires that house designs date from 1880 to 1910. 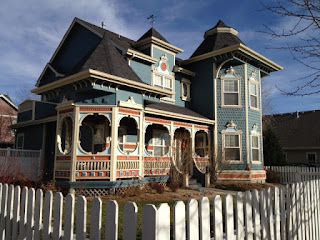 My own house is shown here. A white picket fence surrounds the front yard and the porch includes a full sized gazebo for three-season outdoor dining.

The neighborhood was conceived about fourteen years ago on farmland once owned by the Erie town doctor. It lies twelve miles east of Boulder and about twenty miles north of Denver.

The interior of the homes here can be as modern or traditional as the owner wishes. Naturally, given my love of all things Victorian, I favor as many historical design touches as possible, as long as they do not actually interfere with modern comfort and convenience.

My home office, for example, offers all modern necessities, yet still conveys a homey warmth supplied by a fireplace and abundant window light.

The room is small--small enough to almost merit a designation as an "Inglenook" or chimney corner. An inglenook, historically, was an alcove containing a fireplace and a seating area. It was originally used for cooking, but in later times became a cozy spot to shake off the winter's chill and enjoy conversation and a warm beverage or two.

Though traditional inglenooks feature a centered fireplace with built-in seating lining both walls, my office feels cozy enough to at least be called a Writer's Nook. 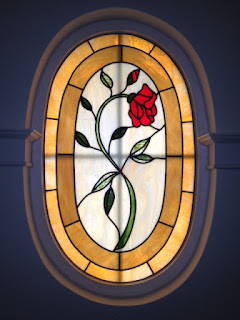 My office also contains a lovely stained glass window, one of five in the home. Does all of this Neo-Victoriana inspire me and infuse my writing with its own unique flavor? Too early to tell. Though I have owned this house for two years, I have only just begun to live here full time.

I have previously written books in all sorts of surroundings and I sometimes think too much comfort is actually a detriment. It becomes so easy to let one's mind start wandering...and not in a creative way. Yet, there is much to be said for surrounding oneself with whatever sparks the imagination.

Living in Erie Village is a full-throttle immersion in the grace and beauty of a bygone moment in America's past and I feel so fortunate to call it home.

I could definitely be inspired to write some stories in that wonderful office. Your home is beautiful, Michelle. Thanks for sharing it with us.

Wow, what a gorgeous house! Really lovely. I totally felt like I traveled backward in time. I have a pair of snow shoes just like those! They hang on the wall above our sliding glass door in the family room. :)

Michelle, what lovely surroundings in which to write. Thanks for sharing your home and the neighborhood with those of us living in more traditional homes. Inspiration comes from all around us, doesn't it? No matter where we live.

Love, love, love the spring picture of your Victorian home, and your writing nook, too. Thanks for sharing!

I pop by your blog every so often and I'm glad I stopped by today to see where you live!

Love that your wonderful Victorian home may instill your creativity, and reading your lovely descriptions made me wonder about my own writing space.

Thanks so much for sharing your view!

What a beautiful home! You are so lucky to have such an awesome writing nook! I have a "writing room" but I rarely use it because I do a lot of my writing during my lunch hour at work. Some day... :)

Your house is fantastic! And your office--what a perfect place to write Victorian mysteries. I hope it provides a lot of inspiration.

My office/boudoir (so it could also serve as an extra bedroom) was designed with the theme of a meadow in bloom. If you go to my website: http://www.marygillgannon.com/news.html you can see it.

Victorian elegance with lots of electrical outlets - perfect! I know what you mean about not getting too comfortable though. When we're on San Juan Island, my writing place is a converted woodshed with nothing but a flat door spread on saw horses for a desk and a couple plug-ins.

I want to come and live with you.

Love it! Living can't get any better than that. Thanks for sharing. I love your writer's Nook. My writing room is no where near as lovely, but I'll try not to be envious. :-) Funny, but I had a dream last night where I was looking over my clothes to see what to save and what to give a way when I came to two green garments, one a sweater and one a vest, and someone, evidently helping me, said, "You look awful in green." LOL

I want to thank you all for your comments and kind compliments. Thank you for visiting my blog!

This is a dream house if there ever was one! You have great taste Michelle. Victorian Charm with modern amenities and great location. I remember seeing the early beginnings of this development back in the'90s when I used to sell real estate.