After that heady and hectic first summer, the realities of owning a retail business in a resort town soon became apparent. Autumn delivered golden aspen leaves, but empty streets. Winter was not much better for business. Though the county was filled with ski tourism, skiers don’t read much. Occasionally a non-skiing spouse might wander into the store, bored and looking for reading material to pass the time until après-ski revelry commenced, but overall sales just barely paid the rent.

And then came the deadliest mountain retail period of all: Mud Season. Late Spring delivers sloppy streets and still-chilly, but longer days. The lonely counter time was not entirely a waste. I was able to continue work on the novel that would eventually become “An Uncommon Enemy.”

Finally, Memorial Day came round again. Halleluiah! All the frustrations and confusions of the previous nine months melted along with those last snow drifts. Summer at 9,000 feet...there’s nothing quite like it.

On my birthday in May of 1997, I officially opened Wolf Moon Books. I offered friends and customers a slice of cake, which had been decorated to look like my logo. I included in the shop decor pieces of furniture from my house. Most were golden oak reproductions of turn of the century styles that complimented age of the building housing the shop, which dated to the early years of the 20th Century.
The shop felt like an extension of my own home--imagine a home library filled with over 5,000 volumes. Of course the bulk of the inventory had to be slanted to fit the tastes of my customers, not my personal selections, but I loved stocking up on books written by friends of mine, whether they were big sellers or not.
During that first year in business, I was my only employee. The summers were the busiest times, with tourists filling and Frisco hosting one festival after another to amuse them. Ride the , Music on , the Frisco Barbeque Challenge, Fourth of July parades...life was a nonstop party.
Witnessing the enthusiasm of the visitors gave me a whole new appreciation of the beautiful area that was my home. That was an unexpected gift. Through their excited eyes I re-experienced my own wonder at life in the high country.
During that first summer, I slowly began to learn the ins and outs of retail shop ownership, with many lessons learned the hard way. But life is a highway, right?
TO BE CONTINUED
No comments:

Owning a Mountain Bookstore--Part One 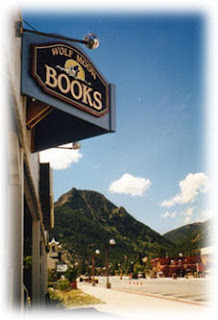 Every booklover I know has dreamed of owning a bookstore at one time or another. I was no exception and had the privilege of realizing that dream in 1997 when I purchased “Frisco Books” from its owner, Peter Brindemore.
I had met Peter the year before when he hosted my first-ever booksigning for the novel, Never Come Down, a romantic mystery set in a remote mountain area not unlike the Summit County, Colorado, environs where we lived.
Frisco is a tiny gem of a town situated between the northern end of the Ten Mile Range and the western shore of . At 9,100 feet in altitude, snow covers the ground seven months of the year. Four ski resorts lie within a fifteen minute drive of Frisco and ski tourism supplies most of Frisco’s commerce. My family had been spending our summers there since 1988 and by 1993, we moved to the high country fulltime.
Prior to that, I had been working as an attorney for the Small Business Administration. Each day I dealt with would-be entrepreneurs who were actively realizing their dreams of self-employment. Their enthusiasm was inspiring--and contagious. It left me with a longing to own my own business. When Peter mentioned he was putting “Frisco Books” up for sale, I jumped at the opportunity. The store was situated on , just three blocks from my house. I could walk to work--another dream fulfilled.
The sale was completed in April of 1997. I closed the store for two weeks to redecorate a bit, making numerous small changes to personalize it. I renamed the shop “Wolf Moon Books.” In folklore, the full moon of January is the “wolf moon.” I love the iconography associated with wolves since my beloved Siberian Husky, Knik, resembled a wolf, so I designed a logo from a photo taken of Knik and ordered the sign maker to create a carved wooden replica of this logo to hang over the shop door.
No comments: 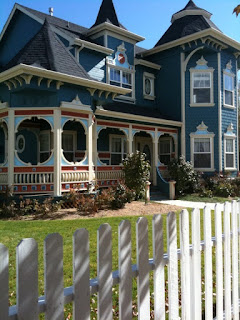 What is a Steampunk lifestyle? What is Steampunk generally? Not really an easy question to answer. Brass Goggles begins the discussion with the statement:
“Steampunk is a genre of fiction set somewhere in the 1800’s during the Victorian Era. The fictional part comes in that technology has gone a bit skewed – though the exact methods vary, generally steam-powered devices that would have been impossible or unfeasible at the time are found to exist.”


A good starting place, but I would hazard to add: all that and so much more. Steampunk has blossomed into a full-throttle aesthetic movement bringing a Victorian design sensibility into everyday objects and fashions and now even has its own musical genre.
Where do Steampunks congregate to share their love of this (probably baffling to outsiders) love of all things neo-Victorian? Gatherings are occurring all over the map. Last October, your intrepid author and her ever-reliable and adventurous spouse, spent an enjoyable weekend in Seattle at the inaugural Steamcon convention, an event set to return November 19-21, 2010. 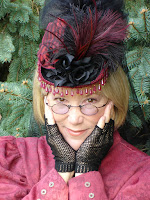 My current work-in-progress, however, may come closer to the mark. It, too, is a mystery set in 1875, but its primary theme--spirit photography--represents the ultimate nexus of the twin Victorian obsession: technology and the occult.
1 comment:

The Second Glass of Absinthe Returns 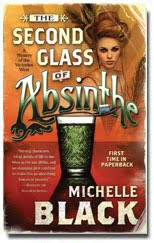 My third Eden Murdoch novel is being released in paperback this coming August. And with a brand new cover!
Since Absinthe plays a role in the story--set in 1880 Leadville, Colorado, I am often asked how I became interested in it.
I first learned of it a long time ago while reading a biography of Oscar Wilde. It was said to be his favorite libation and that he was particularly fond of the ritual that went with drinking it. I enjoyed one of his quotes on absinthe so much I based my title (and, in some ways, the story itself) on it:
"After the first glass [of absinthe] you see things as you wish they were. After the second, you see things as they are not. Finally, you see things as they really are, and that is the most horrible thing in the world."
Absinthe was popular among the artists and writers of the 19th Century and is particularly associated with the Belle Epoch café society in . Its legendary fans included Degas, Van Gogh, Rimbaud, Verlaine, Picasso, and of course, Wilde.
Hemingway also drank absinthe. My favorite quote from him is, "Got tight last night on absinthe. Did knife tricks."
The Absinthe Drinking Ritual

The herbal ingredient called wormwood (Artemisia absinthium) is very bitter, so the liqueur needed sweetening in order to be palatable. Sugar does not readily mix with alcohol, so the absinthe ritual was born.

A sugar cube was placed on a slotted spoon over the glass containing a shot of clear peridot green absinthe. When icy water was drizzled through the sugar to melt it, it begins to "louche." That is, the clear liqueur becomes cloudy and palest jade in color. This signals it is ready to drink. My main character in the book calls this ritual "watching the clouds come out."