The Strange World of Spirit Photography

In my newest Victorian mystery novel, Séance in Sepia, I invite the reader to enter the strange world of spirit photography. This was a very real phenomenon that flourished during the second half of the Nineteenth Century and well into the early Twentieth.

The first commercial spirit photographer set up shop in Boston in the early 1860's. His name was William Mumler and his photographs were an instant sensation. He soon moved to New York to further his reputation and success. The massive loss of life during the Civil War spurred interest in making contact with the departed. Séances were more than a popular parlor entertainment. A large percentage of the population sincerely believed they could contact spirits of deceased loved ones using the services of a medium.

Mumler began to conduct séances in his photographic studio and, because the technology represented by the new invention of photography, his spirit photographs had added credibility.  Technology was scientific, and science couldn't lie, right?

His most famous sitter was the recently widowed Mary Todd Lincoln whose portrait seems to show a spectral Abraham Lincoln standing behind her. There were doubters, of course. P.T. Barnum and others charged Mumler with fraud, claiming that some of his ghost images belonged to living persons.

The May 8th, 1869, issue of Harper's Weekly Magazine reported, "If there is a trick in Mr. Mumler's process it has certainly not been detected as yet. To all appearances spiritual photography rests just where the rappings and table-turnings have rested for some years. Those who believe in it at all will respect no opposing arguments, and disbelievers will reject every favorable hypothesis or explanation. "

Mumler was acquitted, but his reputation was damaged by the charges. Spirit photography's most famous proponent was Sir Arthur Conan Doyle, the creator of Sherlock Holmes. In 1925, he wrote "The Case for Spirit Photography."

Read the first two chapters of Séance in Sepia by clicking here.

Consumed by Consumption: TB and the Victorian West in Mercury’s Rise

As I nosed about, getting my bearings for this new location, I became intrigued with the “selling” of this area of the Victorian West—particularly of Manitou Springs—as a health resort and tourist destination in the mid- to late-1800s. Colorado Springs was hyped as “Little London,” while Manitou Springs was touted as the “Saratoga of the West.” Promotion and puffery was hot and heavy in nearly every period piece of documentation I read, from the backs of cabinet cards to books such as Tourist Guide to Colorado in 1879 by Frank Fossett and New Colorado and the Santa Fe Trail by A.A. Hayes, Jr., published 1880.  The latter quotes one fellow who praises the healthful effects of the weather and mineral springs, adding, “I came here [Manitou] from Chicago on a mattress.”

Many of those coming to the area were, like the fellow from Chicago, “chasing the cure,” that is, looking for relief from tuberculosis, aka consumption, the white plague, the wasting disease, and phthisis. TB was the leading cause of death in the U.S. in the 19th century. From the beginning of the century thru 1870, it was the cause of 1 in 5 deaths, or 20 percent. You need only read about the scourge of the disease, before the discovery of antibiotics effected a true cure, to shudder and pray that “superbug” tuberculosis does not breach the current spectrum of antibiotics. As a science writer, I appreciate the power of metaphor and analogy to make a point, and found this passage in Transactions of the American Medical Association, 1880, written by Ephraim Cutter, M.D., to his colleagues, a real eye-opener:

"It is estimated that one-quarter of the human deaths is caused directly or indirectly by what is commonly called consumption…I find I can write my name readily ten times in one minute…it would take 1 year, 213 days, and 16 hours of unintermitted writing to inscribe the names of this host, if on the average they consisted of thirteen letters. Suppose the vast company could be marshaled in rows four deep and two feet apart, this host would reach 770 miles in length, and occupy 10 days and 17 hours in passing a given point at a continuous rate of three miles an hour.”

It boggles the mind. It’s also hard to imagine that anyone living in the 1880s remained untouched by the effects of the disease. In fact, one of the reasons I decided to tackle the topic of tuberculosis comes from my own family’s history: my grandfather was 9 years old and his sister 13 when their mother and father died of tuberculosis in 1892. Thus orphaned, they were taken in and raised by an aunt and uncle. My grandfather’s story is not unique, and was part of what started me wondering about the effects of this dread disease on the families and individuals of the era. And truly, consumption was everywhere, and patients, families, and physicians were desperate to find a cure.

The 1880 Transactions are full of papers on tuberculosis treatments and research, including “The Salisbury Plans in Consumption—Production in Animals—Rationale and Treatment,” “Artificial Inflation as a Remedial Agent in Diseases of the Lungs,” and “Some Remarks on the Lesions of the Larynx in Phthisis.” The so-called causes and cures ranged far and wide. For instance, in 1881 in the textbook The Principles and Practice of Medicine, some of the causes put forth were hereditary disposition, unfavorable climate, sedentary indoor life, defective ventilation, deficiency of light and “depressing emotions.” Cure routines ranged from reliance on nourishing food, fresh air, and exercise, to the “slaughterhouse cure,” i.e., drinking the blood of freshly slaughtered oxen and cows (reported in Denver in 1879), to patent medicines and nostrums containing such ingredients as cod-liver oil, lime, arsenic, chloroform, the ever-present alcohol, and yes, mercury, even into the 1920s.

Another “cure” proposed by a well-respected physician in 1875 was—I kid you not—growing a beard. (You can find that particular medical treatment in Addison Porter Dutcher’s Pulmonary Tuberculosis: Its Pathology, Nature, Symptoms, Diagnosis, Prognosis, Causes, Hygiene, and Medical Treatment, “Chapter 30: A Plea for the Beards; Its Influence in Protecting the Throat and Lungs from Disease,” pg. 304.)

Is it no wonder, then, when Inez travels to Manitou for her family reunion she hears much about the wonders of the mineral waters and their miraculous health effects, and also finds out about some not-so-miraculous treatments being pedaled to the desperate and the dying? And, since Mercury’s Rise is a mystery, she discovers that not all the deaths are natural … 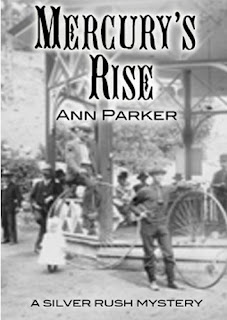 Ann Parker is a California-based science/corporate writer by day and an historical mystery writer by night. Her award-winning Silver Rush series, featuring saloon-owner Inez Stannert, is set in 1880s Colorado, primarily in the silver-mining boomtown of Leadville. The latest in her series, MERCURY’S RISE, is out November 1. Learn more about Ann and her series at http://www.annparker.net

MERCURY’S RISE and the other Silver Rush mysteries are available from independent booksellers, amazon.com, Barnes and Noble and other places where mystery books are sold.

Leave a comment on this post to be eligible to win a Silver Rush mystery prize! Winner will be announced later this week. To see the rest of Ann’s blog tour, check out her Appearances page on her website.
12 comments: